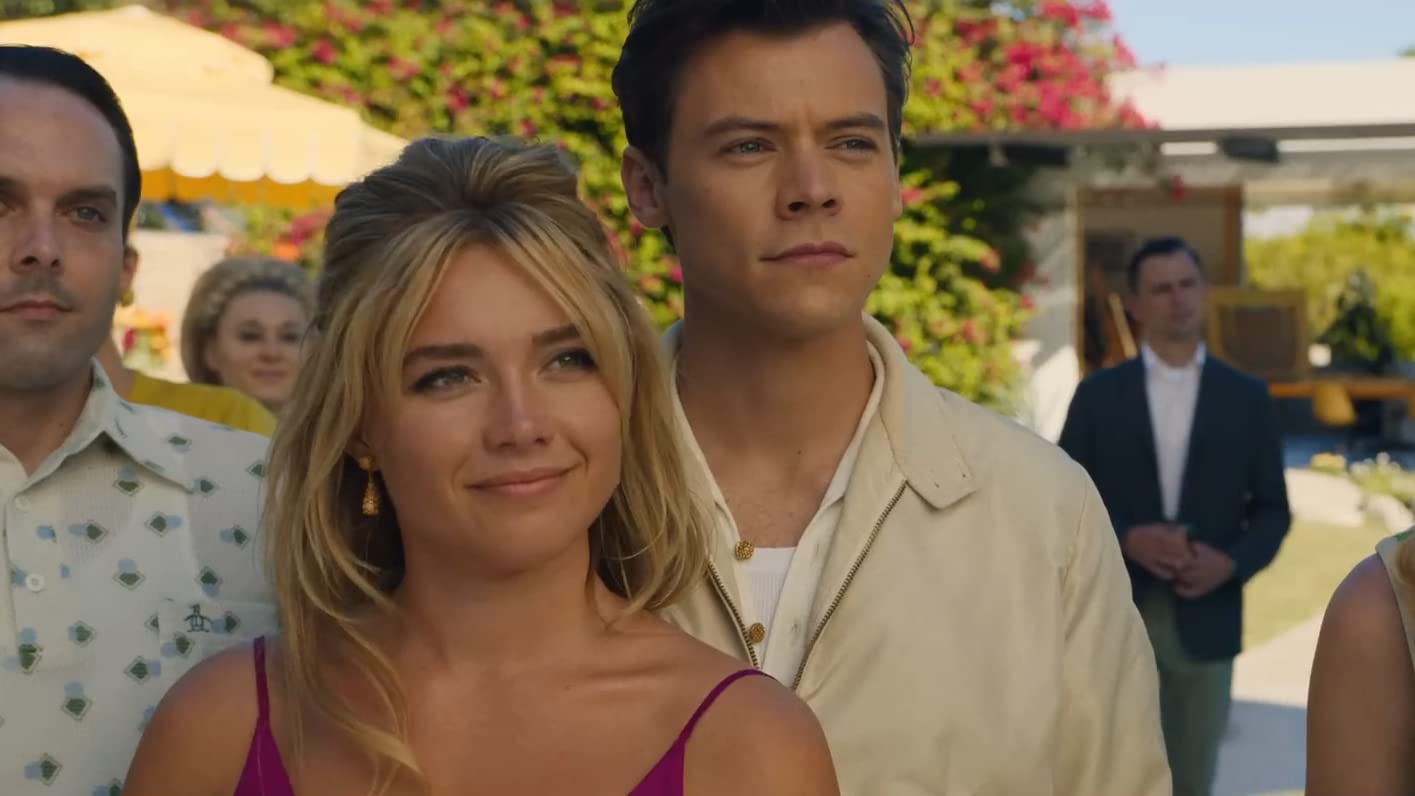 Don’t worry guys, save your money…

Olivia Wilde’s Latest directorial outing, though surrounded by scandal, suffers from something much more dangerous: an expectation which cannot be preceded. Since 2018s Booksmart, Wilde has been drafted into a circle of ‘high art’ filmmakers which has, by this merit, altered people’s expectations of what they wanted Don’t Worry Darling to be. With its star-studded cast, it seems as if Don’t Worry Darling would helm itself as this autumn’s must see prestigious title – socially aware and technically crafted to a tee. The end result, a film which tries to live up to this status but prevails as nothing more than a run-of-the-mill thriller. This is not necessarily the fault of Wilde as Don’t Worry Darling was perhaps a project larger than Wilde herself but how does the film even operate as a regular thriller? Well, not particularly well either.

The film follows Alice (Florence Pugh) who begins to suspect that her 1950s idyllic community may not be what it seems as she grows concerned about the secret doings of the townsfolk patriarchy. From the get go, Pugh absolutely carries the film with a career high performance. The paranoia that grows within her permeates perfectly through her acting which helps embody a slight sincerity to the project. On the contrary, we must address the elephant in the room, that of Harry Styles as Alice’s husband, Jack. Though my expectation of the pop singers’ acting chops may have been rather low beforehand, it’s safe to say the bar was sunk to the bottom of the mariana trench at this point. He looks as though he has no idea what he is doing or even knows why he is on set. The accent changes with every line whether it be a Yanky tinge in one line, to the Queen’s King’s English in the next and the occasional Aussie annunciation in the next. In the film’s more dramatic moments, he confuses screaming and shouting for conveying emotion and seeing him pitted against Pugh’s incredible skill only further highlights the lack of his own.

The supporting cast are fine. Chris Pine is mostly great as the sleazy project leader, Frank, however, the poor writing quickly sculpts him into a simple caricature. A common flaw with the dialogue is how it pigeonholes each character into one personality type. What this results in is characters all throughout delivering lines which hardly differ from the rest of their dialogue. Frank’s entire script revolves almost purely around quips such as ‘We are progress…this is the future’ whereas Bunny’s (Wilde) voice box is looped on ringers such as ‘We have to stay here, we cannot question anything’. The inorganic nature of each character only slogs down the film’s pacing as each interaction is merely a copy of the previous. This is only made worse by the film’s sluggish storytelling as a whole. The film lacks a real investigation for Alice to follow down the rabbit hole. Almost ¾ through the film, it feels as though no progress has been traversed through the narrative. Much of the runtime consists of illusionary sequences which have no true link to one another and only come across as Wilde cosplaying as an experimental filmmaker. Each scene exists as its own vignette for the ‘weird’ and unexplainable to take over with little consideration for the overall narrative cohesion.

Then comes the film’s ‘big reveal’ which is haphazardly explained and far too derivative of other film works to not see from a mile away. About 20 minutes follows one of the most rushed final acts in film this year and then, Boom!, it’s all over. In hindsight, the film feels nothing more than a pastiche of works which feel more committed to their own world building and messaging than Don’t worry Darling ever attempts. The social commentary is far too shallow to even be remotely compelling and because of its rushed finale, has an unconvincing execution. In many ways, Don’t worry Darling is just an exercise in aesthetics and in this regard, it succeeds. The film has a soundtrack and some colorful camera work which pairs well with the art deco set design which cleverly denotes an intentionally false portrayal of suburbia. If this is all you would be interested in, then here’s your film.

Don’t Worry Darling is a film which wears its influences too well-knitted on its sleeve. Because so, it becomes far too overshadowed by the mere prospect of other film’s executing what Don’t Worry Darling attempts, better. Though it is admittedly beautiful to look at and listen to and is carried by Pugh’s fantastic lead performance, the narrative is simply too boring and poorly paced to stand out as more than just a failed Black Mirror episode.