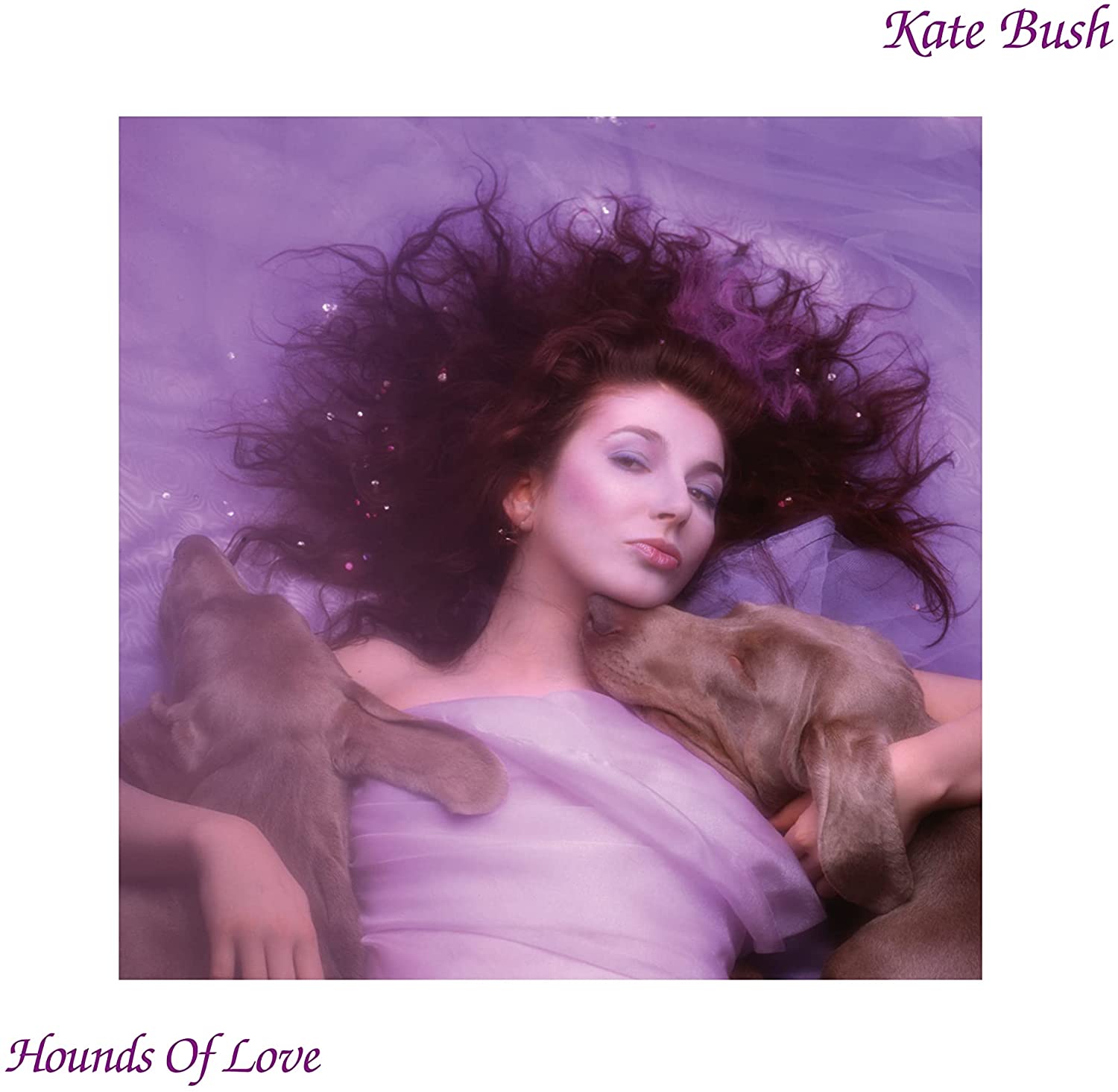 Hounds of Love is an Art Pop staple which forefronts the best of Bush’s songwriting and extravagant production.

In response to the resurgence in Bush’s popularity – in thanks to “Running Up That Hill (A Deal With God)” being featured in season 4 of Stranger Things – it seemed fit to finally write a review of that track’s respective album. Whilst Bush’s most accessible and commercially viable album on the surface, it is still a transcendent masterwork from being to end. The album can be split into two parts (relative to each side of the LP). Side one is what is actually Hounds of Love. whereas side two is bagged with the heading of ‘The Ninth Wave”: a musically odyssey about a woman’s plight as she is stuck stranded in the ocean.

Side One features all of the album’s big singles and, generally, songs which can be listened to in their own right. We open with the aforementioned “Running Up That Hill (A Deal with God)” whose lyrics detail a character’s desire to swap bodies with her lover as a way to truly experience and understand what the other is feeling. Complimenting this poignant narrative is galloping percussion and sour synths which instil the track with a bitter sense of doom. The melody of said synths, however, is just so damn catchy and is guaranteed to be having you hum it all day (for the rest of your life in fact). The song also possesses a real sense of tension as the production grows denser and Bush’s vocals deform into crying desperations for empathy. One of the best album openers ever? I’d say so.

The title track is next and, man, does it half thrust you in right away. The abrasive drum and a dialogue snippet kickstarts “Hounds of Love” into a gigantuan chasm of searing strings and animalistic backing chants. Whilst the song may seem a little too out there on initial listen, it eventually ensnares you in its chaos, and soon, you too will be echoing Bush’s reverberated shouts. The lyrics on this track are also incredibly beautiful and really paints a twisted fairytale imagery within ones mind (‘I found a fox caught by dogs’…’His little heart, it beats so fast And I’m ashamed of running away’). “The Big Sky” follows and whilst I do like the song, it is a weaker cut from the record. Again, it possesses a theatricality to production though the songwriting here is a little more lacklustre with a progression seemingly unclear and what seem like improvised lyrics simple scattered throughout. that being said, the backing vocals towards the end add a nice touch and personality to the track.

Things take a more sensual and relaxed tone with “Mother Stands for Comfort” as it rocks you into a sweet lullaby. There is something rather eerie about its instrumentation however based on how minimalist it seems. The sounds of windows crashing which make appearances throughout to add a nice juxtaposition to what would be an otherwise soothing track. The final track of side one, “Cloudbusting”, is probably my favourite on the album if not my favourite song from Bush’s entire catalogue. It truly forefronts Bush’s genius and proves testament to that fact that, sometimes, less is more. The song’s progression is led almost solely by a simple beat and string arrangement as the incredible songwriting carries the rest of the tune. Another conceptual track, Cloudbusting’s lyrics take inspiration from the story of Wilhelm Reich which details his efforts to invent a ‘rain-maker’ known as a ‘Cloudbuster’. Musically, there is a slight sinisterness beneath its enchantment as Bush’s lyrics of ‘I know that something good is gonna happen, I don’t know when” cast a shadow of doubt over the possibility of a better tomorrow.

As we transition into The Ninth Wave, “And Dream of Sheep” serenades us with a piano driven lullaby with a delivery akin to a princess singing at the top of a tower she has been locked away in. Bush positions her character in a vulnerable place – one where she longs for peace in a situation of despair. In turn, by the tracks end it seems she has grown an acceptance of death and inner peace of succumbing to its touch. “Under Ice” follows and is the possibly the song which most matches its namesake. With its Jaws-like string stabs, the song does make you in fact feel like its yourself trapped beneath those icy waters. The range of Bush’s styles are on display here as “Under Ice” manages to convey similar themes to that of “And Dream of Sheep” but through a more menacing musical lens. Nothing ever becomes as brooding as the next track, however – “Waking the Witch”. The song lures you into the light before quickly dropping you into the pits of hell. It is here where Bush manages to create a song which is genuinely frightening to listen to – complimented by the demonic growls and Kate’s mangled cries throughout. “Watching you Without me” returns the album to a more mellow form with a minimalist set of oddly tribal sounding instruments accompanying Bush’s sleepy delivery as if she is falling asleep mid-ritual. It’s a decent track but a little insignificant in respect to the rest of side two.

We then head towards the album’s final moments. “The Jig of Life” takes inspiration of Celtic music with its use of fiddles and bagpipes alike. The song sees a return to somewhat of a verse-chorus structure yet still encapsulates a free flowing nature present in the rest of The Ninth Wave tracks. The chorus on this track is actually my favourite on the album with Kate’s vocal melody intertwining perfectly with the colourful bagpipes in the background. “Hello Earth” is another track which simply feels huge. This is not just instrumentally, but thematically as the song almost seems like a celebration of Earth itself and all its components. The ambient passages also ironically, feel a little intergalactic as if they were sounds picked up through a radio signal sent from trillions of light years away. The song also feels like a perfect climax of all the album’s sounds culminating in a volcanic burst – especially as Bush transitions to her ‘All you sailors’ section. Finally, “The Morning Fog” sends off the album and ends the overarching narrative in a beautifully handled manner. The track’s lyrics detail the character’s experience of surviving the night in open water and how she has ultimately been born again to appreciate and love the elements of her life whilst they still surround her. Poetry at its finest.

In all, Hounds of Love is an album stacked with enchanting production, creative song composition and profound lyricism which only adds to each track’s mysticism. Though the singles in the first half I suppose can be listened to on the fly, to really experience Hounds of Love, you should just sit down, relax and indulge yourself in 48 minutes of Kate Bush perfection.

Strongest Songs: Running Up That Hill (A Deal with God), Hounds of Love, Cloudbusting, And Dream of Sheep, The Jig of Life, Hello Earth