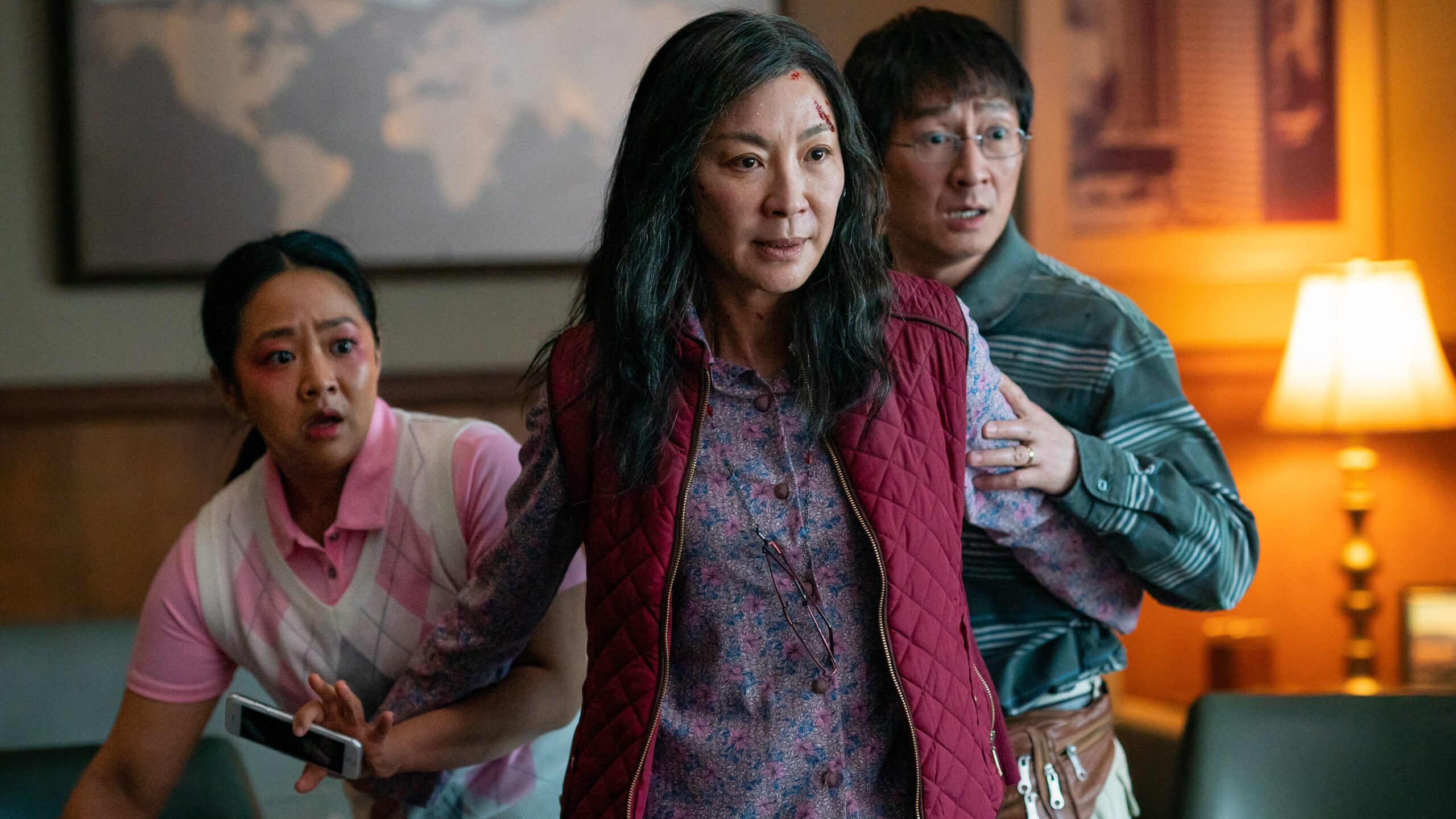 This kaleidoscopic step inside Daniels’ own multiverse of madness results in one of the most exciting, creative and tender productions of the decade thus far.

It’s only once in a while that a film as ambitious as Everything Everywhere All at Once blesses us with its presence within the Industry. It’s even more rare so for these ambitions to be truly realised and executed with such sheer precision and style for the title to be long cemented in the halls of filmmaking excellence. This is one of those films. The film delivers on all calibres to the point close to cinematic perfection. From its technical mastery, original storytelling to its outstanding performances, Everything Everywhere At All Once lives up to its name in the best way possible.

The film follows Chinese Immigrant living in the US, Evelyn Wang (Michelle Yeoh) as she acquires different skills from alternate versions of herself in other universes to help defeat a formidable foe – threatening all existing realities. Though the film sounds lambasted with a complex idea, the root of its narrative treads very real and familiar issues for audiences. Themes of love, hope, regret, dreams and so on are carefully interwoven throughout the story that it helps us keep attached emotionally aside from being solely attracted by the visual aesthetics. This is not to discredit the film’s visuals however as they are incredible – especially considering the VFX team consisted of five members. With a budget of $25 million, Everything Everywhere manages to look just as polished (if not more) than many contemporary blockbusters with ten times the budget. The production and costume design are also visually striking with its flamboyancy and radiance of fun.

The film has no shortage of action. The martial arts sequences are all very well choreographed and feature very creative fight sequences utilising the most absurd of weapons. The results are frankly hilarious and further add to the film’s idiosyncrasy. Between these brawling moments, the film still maintains a constant adrenaline even when fists aren’t raised or fanny packs being flailed. The lore established within the film keeps you ever enveloped in Everything Everywhere‘s world building and constantly hooked throughout the almost 2h 30 min runtime. As Evelyn also is oblivious to her complex situation at the film’s start, we learn about the world with her – making audiences feel more included and not scratching her heads as to what is going on. The very concept of parallel universes of course conjures up the prospect of ‘what could like life be like if I did A or did B?’. Evelyn gets to face these dilemmas full throttle as she steps into alternative versions of her life. The confrontations which arise from this create internalised conflict within her family which, in turn, leads to the films most tender moments.

Evelyn’s husband Weymond (Ke Huy Quan) is at the forefront of this emotional drive as he wrestles with his own crises of ambition and relationship problems with his wife. Quan’s performance is the film’s standout. The vast array of personalities and characteristics he pulls off is especially impressive considering the once child-actor’s long Hollywood hiatus. One moment in film in particular, in an almost Wong Kar Wai-styled sequence, forefronts the sheer rawness of the Weymond’s character and cements him as one to be remembered for the ages. Yeoh, on the other hand, delivers possibly my favourite performance by the actress so far with a sympathetic characterisation of life in America as in immigrant and one battling with both the nihilistic way of American life and the barriers which isolation herself from her daughter’s affection. This is where themes of LGBT issues are introduced primarily and larger discourses surrounding inter-generational differences.

By its end, Everything Everywhere All At Once left me truly spellbound. As a melting pot of different genres and themes, the film felt almost like a celebration of cinema itself. Each action, each scene and each piece of dialogue details the reasons why I love cinema in the first place. Everything Everywhere is nothing short of a marvel and one whose immense variety and scope will leave me forever longing the euphoric sensation which rushed through my body watching this for the first time.