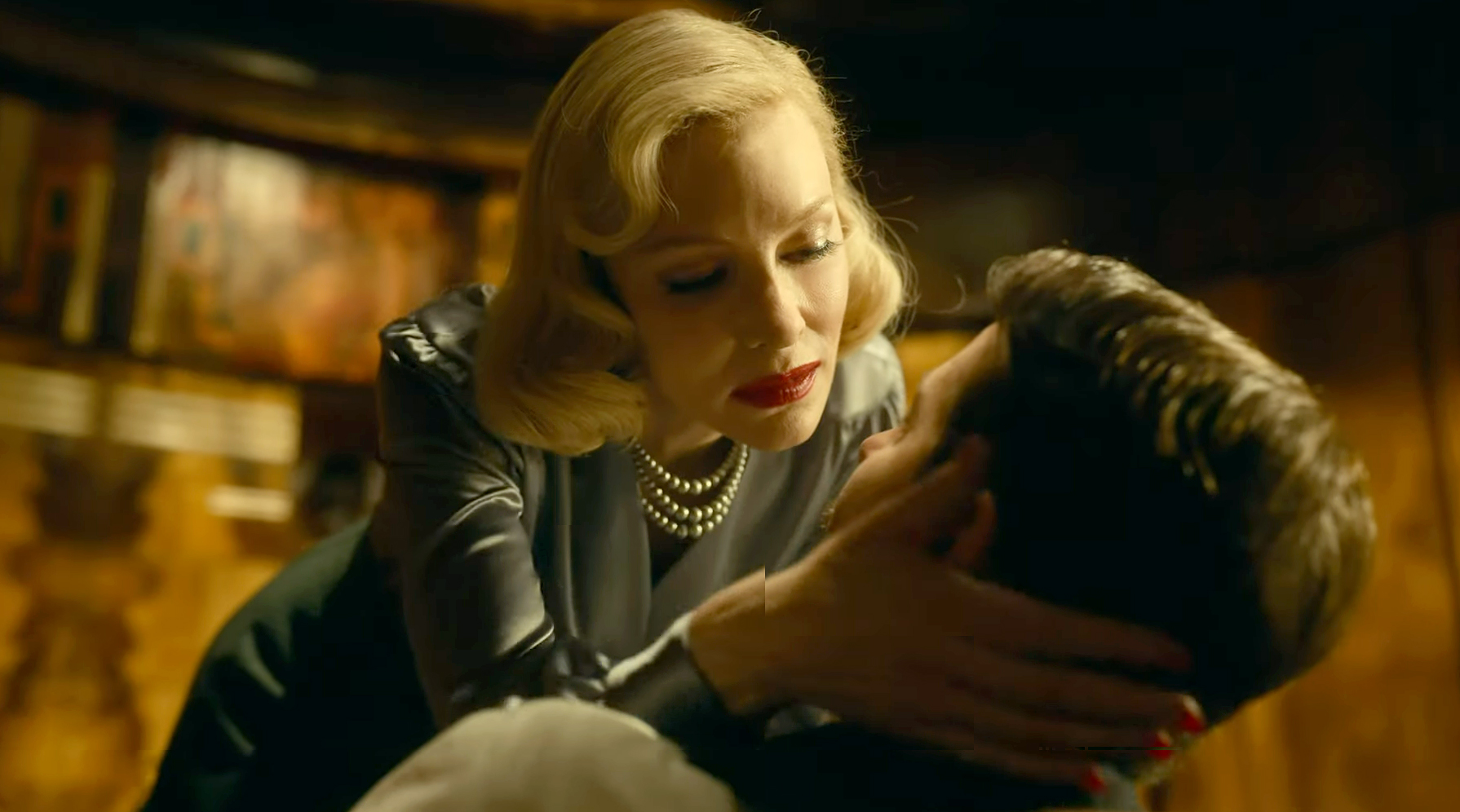 Though suffering from a lacklustre script which wains much of the film’s tension, Nightmare Alley still mostly works as a decent con thriller.

As a remaking of 1947 picture of the same name, the film follows carny, Stanton Carlisle (Bradley Cooper) as he gains prominence within a travelling carnival before, ultimately, breaking out his own ‘physic’ act alongside his accomplice, Molly (Rooney Mara). The pair tour across America swindling the vulnerable and gullible alike. Stan eventually teams up with psychiatrist Dr Lilith Ritter (Cate Blanchett) as they both plan to weaponise their act towards the country’s powerful elite.

Nightmare Alley sees Guillermo Del Toro shedding his fantastical routes. Instead, the director dips his toes into the world of noir-filmmaking with mixed results. On one hand, his approach allows for some beautiful light-bending cinematography in both internal and external shots. On the contrary, its implementation sometimes gives the film too polished of an aesthetic which ascribe to predictable tropes within the genre. The more ‘honest’ characters are soaked in soft-lighting whereas the inevitably distrustful figures loom in shadows with only portions of their face in illumination. Through these means, Del Toro blatantly signals who and who can’t be trusted throughout the film resulting in character decisions being both predictable and unambitious. The dialogue’s black and white nature also results in a similar impact as ‘morally lesser’ characters often speak in cryptic tongue mirroring that of their on-screen presentation.

Though indeed predictable, the film does manage to elicit some great scenes on the occasion. Though generally scattered across the film’s 140 minute runtime, a bulk of these arise through interactions between Cooper and Blanchett. Their first encounter, no less, protrudes a sense of uneasiness and clearly denotes Blanchett’s Ritter as a force to be reckoned with – possessing an essence of danger much on par to Carlisle himself. The onscreen relation between Carlisle and Molly seemed to lacked this level of dynamicity however. Though initial meetings between the two at the carnival outlined as strong chemistry between their respective actors, this all seems to dissipate by the film’s latter half as Mara’s character becomes instantly side-lined following Blanchett’s introduction. As a fan of Mara’s work, I found her acting in this film to be rather one note which I suppose could be a driving force between her and Cooper’s stale onscreen presence. It takes particular hold within scenes of conflict whereby Mara’s attempts of being oppositional or angry oddly mirrors that of a girl answering back to her mother after being grounded. Maybe this may be intentional to reflect the character’s youth and naivety but the film never seems to be convincing of so.

The last actress of notable mention is Collette who brilliantly portrays mock-mystic Zeena Krumbrien. Her character, though not a saint herself, possesses a level of sensitivity and dimensionality seemingly lacking amongst the others in the supporting cast. This may be attributed to her backstory and relationship with Pete which are both explored in detail across the film’s first act. Her screen time nosedives after the film’s first hour but her brief appearance later in the film allows for Collette’s brilliance to shine through once more.

As a ‘slow burn’, the film does sometimes suffer from pacing issues. The second act seems to float through points of uneventfulness as the story constantly attempts to latch itself onto potential plots which may wring out narrative excitement but, usually, to no avail. In the bigger picture, what this results is in a film which lacks a real thread of cohesion by instead hopping from one idea to another without ever really ever finding its footing. This can be best demonstrated in the film’s final act as it exists as a succession of climaxes coming together in a ham-handed manner with its priorities lying in the throwing of curve ball after curve ball without much regard for believability and narrative sense.

Despite this, the first act, though lacking in dramatic highpoints, does remain at least engaging as we, along with Stan, begin to unravel both the seedy and deceptive world of the carnival. It allows for Willem Dafoe to also relish in his role as a ruthless ringleader’s who’s authoritarian grip on his subjects outlines the attraction’s cruelty and disregard of those suffering from issues of alcoholism and drug addiction at the time. His repeated question of ‘is he man or beast?’ proves to be one of thematic importance and one which cleverly interlinks with much of Carlisle’s decision-making across much of the film’s runtime – ultimately, culminating in an almost ironic demise for the carny.

In Summation, Nightmare Alley can be seen more as Del Toro’s experimentation into the field of noir than a complete body of filmmaking. Though much of its stylistic incorporation does both aid and hinder the film, its still a mostly entertaining work bolstered by some strong performances and successful world building.