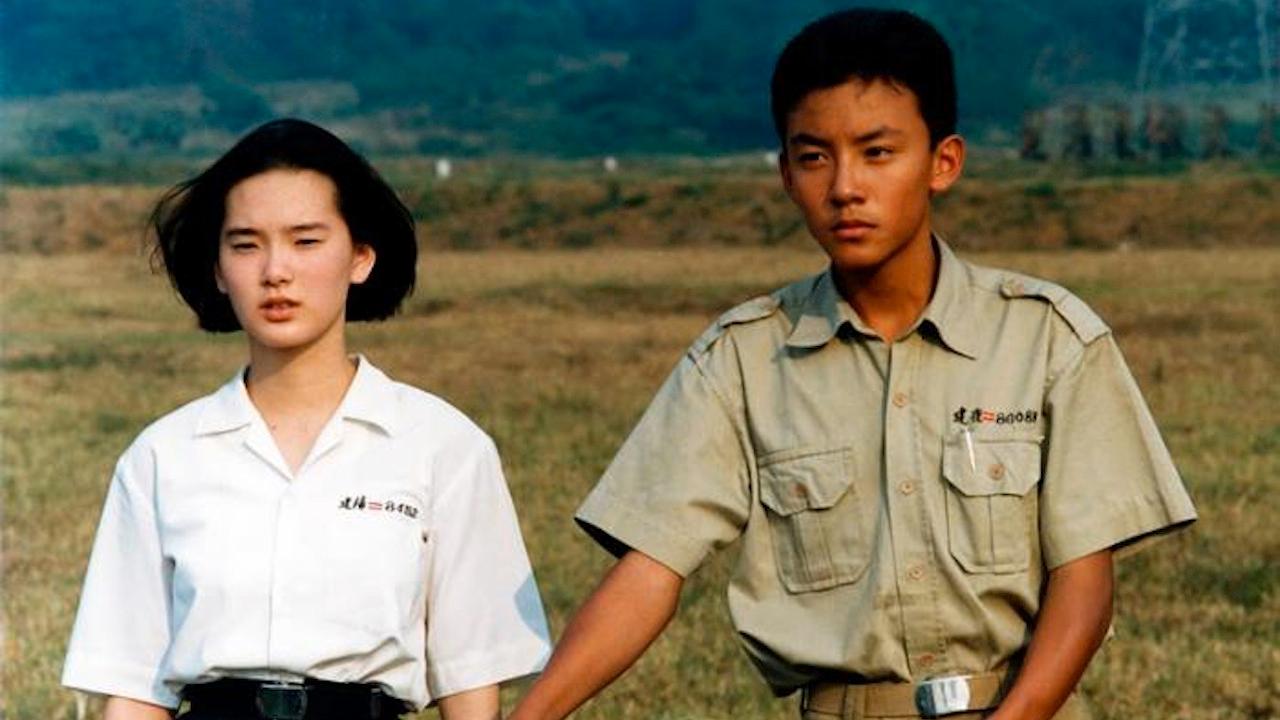 Even within it’s opening moments, A Brighter Summer Day cements itself as being a film heavily based around notion of the future. With the context behind the Chinese Civil War and the Kuomintang’s (KMT) exodus to the island of Taiwan outset from the very first instance, the film plays out to detail the lingering aftermath of these events with issues of identity, security and prosperity forefront across the runtime’s entirety. Characters reminiscence about life on the mainland uncertain of whether their memories will ever be able to be replicated or if they can only look towards a future destined on the island. These notions of uncertainty aren’t solely explored on a national level but primarily through the lens of Si’r (Chang Chen) and his family. As a young boy struggling to traverse through the hardships of life in the Taipei suburbs, we see the world from his point of view – a depiction of society largely burdened by injustice and violence. The odds always stack against him with adult authority constantly undermining him and holding him back from breaking free of the cyclical livelihood he has grown reluctantly accustomed to.

Much of the narrative concerns the quarrelling between two rival gangs who operate throughout Si’r town. They are the 217 and The Little Park Boys. Much of their onscreen opposition largely mirrors that of 2003’s City of God with the protagonist seemingly caught in the midst of conflict between the two parties. Whereas that film’s lead manages to ultimately avoid treading down that way of life, A Brighter Summer Day presents a more nihilistic take on the matter with it suggesting an almost inevitably in regards to falling into deviancy. As we see throughout the film’s almost 4 hour runtime, bloodshed becomes engrained within Si’r’s way of life – not to necessarily suggest he exists in a survival of the fittest hierarchal world, but that he sees violence as being, not only an acceptable bargaining tool, but one which paves the for little to no long term consequence.

Much of the film concentrates on the relationship between Si’r and Ming (Lisa Yang) though it never truly trails the film into a ‘romance’ genre. Much of their connection is interlinked with their attempts to avoid the attention of these aforementioned gang activities though this largely proves futile. Come to thing of it, there is something particularly Shakespearean about the tragedy which unfold throughout A Brighter Summer Day: star crossed lovers caught between the crossfire of rival gangs? Sounds familiar. That being said, to call this story a retelling of Romeo and Juliet would be an incredible inaccuracy. Yang removes the commonly romanticised perspective on love and instead, treats it with an dissected view – in doing so, revealing its ephemeral and all too destructive nature.

Aside from Si’r and Ming, the film boasts a gigantean supporting cast which helps us become further invested in Yang’s worldbuilding. Where A Brighter Summer Day excels however is its avoidance to relegate its supporting cast as mere accessories to the two lead’s narratives. Each character is constructed with a sensitivity and care, which in turn, make them just as vital in the film’s narrative assemblage as Si’r. To elaborate, we see their relationships with other characters, learn about their backstories and their interests alike. They also change which is a vital importance in the film. This is because, though Si’r operates as an independent character obviously, much of his development is reactionary to the changes around him. He is a mere pawn on the chessboard of life being played by the culture and societal constructs surrounding him.

Yang’s attention to detail across the film is incredible. He ascribes much thematic value to simple props such as books and flashlights but also allows his framing to equally speak emotional volumes. I particularly enjoy Yang’s use of deep space within his shots which seemingly provide environments with a warped and elongated geometry all while making his characters appear small and almost lost within each shot. I guess this helps relay his emphasis on constructing his ensemble as individuals as each of their respective spaces on screen are easily defined. Perhaps it also highlights an antithesis behind the film’s philosophy in addition – that of unified national mentality contrasting each citizen’s loneliness within the country. A similar technique is prevalent in Yang’s 2000 masterwork Yi Yi, however, that film swaps national mentality for family dynamics and each citizen for member of the family.

In summation, the film manages to course through its 4 hour runtime in titanic fashion. The pacing remains excellent and does not sacrifice a single minute for a dull moment. Though essentially a tale of tragedy, there is a certain euphoric nature to the film which seems absent from much of the film industry’s countless other releases. I would highly recommend setting aside 4 hours for this as it flies by in a surprising fashion – I suppose that’s the magic of Yang’s direction after all.